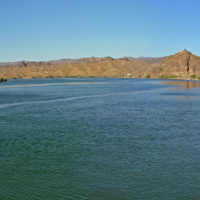 By Havasu Guide on February 10, 2018 in Fishing Reports

John Galbraith of BassTackleMaster.com reported the average daytime water temp has been running around 54-58 degrees. The daytime striper bite is good for 2-pound class fish using cut anchovies. Those wanting to get “bit” by the bigger stripers must fish during twilight or dark hours. Vast majority of stripers have been coming fromthe mouth of the river south to Black Rock Cove. Best artificial baits this week have been green-tailed Bass Assassins and 3/4 or 1-ounce White Rat-L-Traps.

Look for evenings or mornings with foul weather windy conditions as the larger stripers will usually be “on the bite” during this time. Artificial scent is important during tough fishing times as the stripers and bass need a little extra incentive to draw an aggressive strike.

It’s a cover water game as smallies move frequently and you may have to cover several miles of shoreline to find them. We have a great population of smallmouth so don’t give up.

View all posts by Havasu Guide →